The Libertarian Party Opportunity in 2020

Picnic tables near
the park ramada

Donate to the Gila AZ LP

YES! Independence will be Declared in Green Valley Park

For the fourteenth year this Fourth of July our nation’s Declaration of Independence will be read publicly in the comfort of the grassy shade in Green Valley Park at 8:30 AM.

This year’s reading event will not be sponsored by Payson’s Patriotic Event Committee. But is being planned by the same Payson volunteers and AV crew who have executed it in the past.

Thoughtful self-governance is a capstone of a free society. So we celebrate our independence while considering health concerns of others. The Mayor’s proclamation regarding masks will apply and hand sanitizer will be available. Picnic blanket distances should insure good spacing.

Attendees can voluntarily sign their attendance for future proof that we did a great job of not jeopardizing health. But this is not mandatory – since we indeed do live in a free country.

Remembering the memorial where Col William Sahno usually recalled our debts to those who paid the dearest price for our freedoms. reminding us that we should not relinquish any of them thoughtlessly. We will this year begin “over the hill” in the shade At 8:30 am.

Audience microphones will be provide for questions and comments.

NOTE A nearby table will have information from many nation-wide organizations if attendees ask what they can do to help preserve American’s independence in this time of nation-wide troubles.

See you on Independence Day!

Kudos to the Payson Homeless Initiative

The following Letter to the Editor by Larry Hoffenberg, secretary/treasurer of the Gila County Libertarian Party, was published by the Payson Roundup on December 27,2019.

Kudos to the Payson Homeless Initiative

Founding Father and principle architect of the U.S. Constitution James Madison stated unequivocally: “Charity is no part of the legislative duty of the government.”

Libertarians strongly agree with Madison and we believe that people in need are best served by grassroots private volunteer organizations, rather than by government-run, taxpayer-at-large funded operations, which tend to be heavy on bureaucracy and regulation rather than on actually delivering results and aid to those in need.

In the spirit of James Madison, the Gila County Libertarian Party has made a financial contribution to the Payson Homeless Initiative, and we encourage other political groups in the area as well as non-political civic and charitable groups to get behind the Payson Homeless Initiative and make donations or provide volunteers to help this truly grassroots private sector effort.

Americans are the most generous and charitable people on the planet, and we would do even more if we retained more of the fruits of our labor. Less taxes = more money in private hands = more contributions to productive, private voluntary charitable programs. With less of a tax burden, caring members of society will be even more charitable, and society will be strengthened.

LBJ’s War on Poverty has been an epic failure. 55 years later, homelessness is rampant, especially in California. Tens of thousands of people gather in homeless camps with diseases such as tuberculosis and hepatitis posing great risk to the public at large. There is a better way, and private voluntary organizations such as the Payson Homeless Initiative are a prime example.

The Gila County Libertarian Party extends a well-deserved thank you to all the individuals and organizations that are already volunteering and contributing to the Payson Homeless Initiative. Keep up the great work!

On September 11, 2018, the Arizona Secretary of State released the official tally of votes from the August 28 primaries. This is the first knowledge anyone has had of the write-ins in the primaries. Four parties held primaries: Republican, Democratic, Libertarian, and Green. Neither of the last two parties had any candidates’ names printed on their primary ballots for any federal or state office. Instead, these parties attempted to nominate via write-ins in the primaries. Read More.

Claiming Gov. Doug Ducey acted illegally, the former chairman of the Arizona Libertarian Party has sued to give voters a say in who replaces John McCain — and soon.

Michael Kielsky acknowledges that the U.S. Constitution allows the governor to name an immediate replacement on the death or resignation of any sitting senator. But Kielsky, in a lawsuit filed here, contends that the governor is required to schedule a special election as soon as practicable to fill the post. And that, he said, means within six months. Read More.

Remember, the deadline for mail-in ballots in Tuesday, August 28th. Please send in your ballots early to be sure they are received in time.

Can’t say that enough.  The opposition has gotten, well, challenging.

As a group we have conducted ourselves well.  That reflects on each of us.

So, thank you!  When you have the stronger position, there is no need to become nasty.

That does not mean we are not above some “creative” marketing efforts. 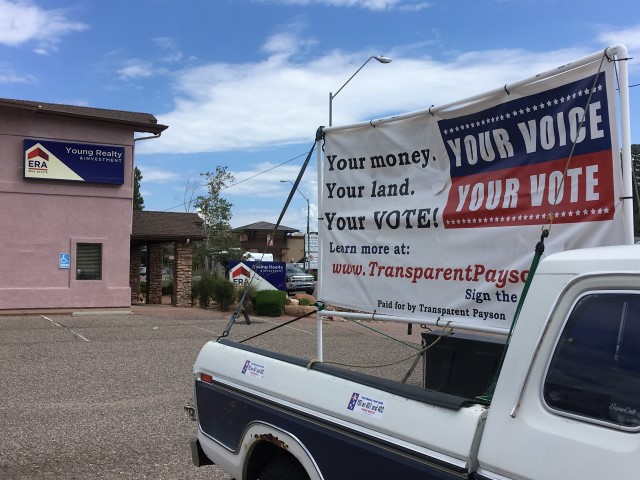 We’ve made four important updates to the Transparent Payson Website.

Payson Residents: Are you ready for the August 28th elections?

The Gila County Libertarian Party urges Payson residents to become informed about the issues and candidates on the upcoming August 28th ballot. Up for vote are mayor, three town council seats, and three ballot initiatives/propositions.

Staring the last week of July, each household in Payson with one or more registered voters will receive by snail mail an official “Publicity Pamphlet.” This contains the full text of each Proposition and any arguments submitted for or against. We urge you to review this pamphlet prior to voting.

Our bylaws prevent the Libertarian Party from endorsing specific candidates in non-partisan races, but generally speaking we favor candidates who espouse libertarian positions such as lower taxes, lower government spending and greater accountability.

We urge you to become informed about the two mayoral candidates and the seven town council candidates, and to cast your votes accordingly.  The Payson Roundup has prepared the following profiles for each of the candidates.

The Gila County Libertarian Party endorses a “YES” vote on all three initiatives:

For more information on the ballot issues, please visit TransparentPayson.org.

PHOENIX, Ariz. (Dec. 20, 2017) – A bill pre-filed in the Arizona House would decriminalize marijuana possession. Passage into law during the 2018 legislative session would take another step toward further nullifying federal cannabis prohibition in effect in the state. Read more.

It should make all Arizonans who support competition in our democratic electoral process seethe too.

PHOENIX — A federal judge has rebuffed a bid by the Libertarian Party to kill an Arizona law even its sponsors concede was designed to make it harder for minor party candidates to get on the general election ballot. Read more.

A letter to the editor by Acting Secretary Larry Hoffenberg was published by the Arizona Silver Belt on June 14 and the Payson Roundup on June 16.