The Libertarian Party Opportunity in 2023

Donate to the Gila AZ LP

This was the tiny Gila AZ LP’s first go at an outreach event such as this and it was a great success! 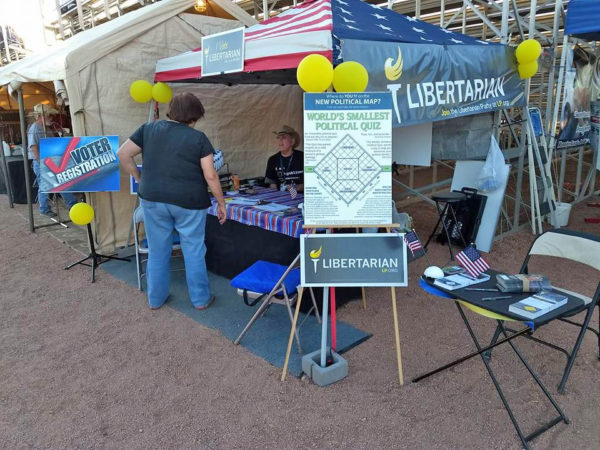 “We got a ton of people to take “The World’s Smallest Political Quiz” and we charted their results on a giant WSPQ poster. We found that most Republicans who took the Quiz scored as Libertarian.  Only two Democrats would even take the quiz,” explained Jeff Daniels, Chairman of the Gila County Libertarian Party. “We found a great ice breaker too. We got a $20 helium balloon kit and passed out balloons to the kids. While we were blowing up the balloon, it gave us a great opportunity to talk to the parents.” 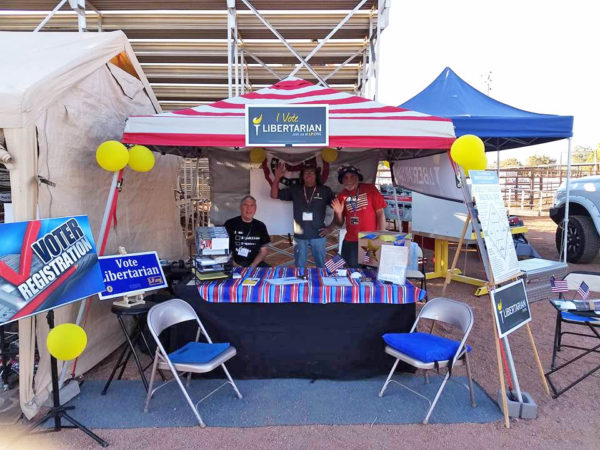 Chairman Daniels continued: “Occasionally we would get some resistance but we then mentioned that we were ‘conducting a social experiment‘ to find out where people actually stand compared to their perceived political beliefs. That usually got their attention and they became interested that they were part of an experiment. This whole experience was a blast.”

Bruce Wales, former Gila County Libertarian Chairman, added, “It was a kick really, watching the hesitation, then a question, then the quiz, then the surprise, then the willingness to listen and walk away with more Libertarian literature.”

Bruce quietly strummed his acoustic guitar in the booth to help draw in passers-by and to create a non-confrontational setting. Adds Bruce, “Since we were cautioned to not go out of our booth to promote, we came up with ways to entice and still be approachable. We maximized our 10 by 10 foot area pretty well, I think!”

The summer edition of the Payson Rodeo, to be held August 15-18, is the World’s Oldest Continuous Rodeo, running for over 135 years! The Gila AZ LP will be there. Come see us and join us in the booth!